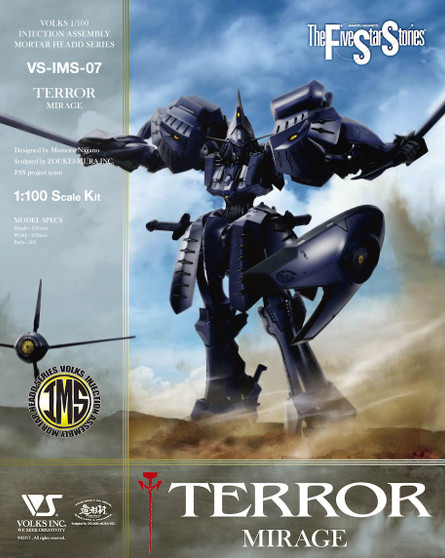 The TERROR MIRAGE is a MIRAGE MACHINE that has its scouting and stealth capabilities strengthened beyond the CROSS MIRAGE. Originally developed for reconnaissance and spying, the TERROR MIRAGE is superior with fighting at night and in bad weather conditions.

The unique pattern painted all over its body is known as “confusion armor”. It emits jamming signals in order to confuse the enemy’s scanning signals. It is specially designed to interfere with the enemy’s optical scanning. The lower body has the same design as the L.E.D. MIRAGE, which makes a contrast with its relatively compact upper body. In order to not impede its fine movements, the TERROR MIRAGE is equipped with Gran Seekers, signal flares, missiles, etc., that is all stored away in its tough shoulder armor. Its standard issue compact Veil can also be equipped at both the waist and the arms. Folded away behind its waist, it is equipped with an enormous homing boomerang called the “Val Balahs”. When it is ready to carry in its arms, its “Veil” can be hung from the waist.