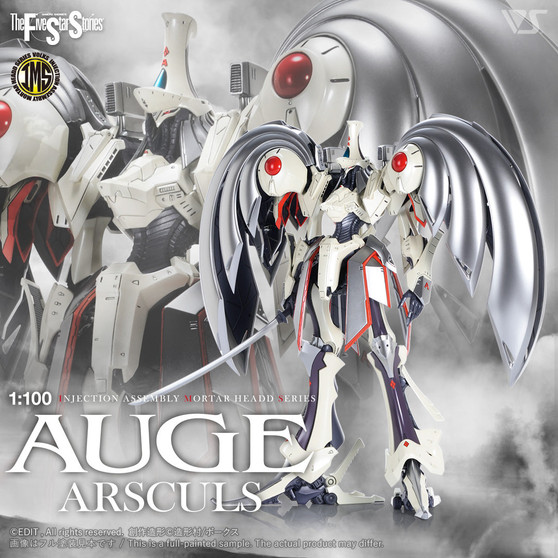 The long-awaited IMS version of the "Auge Arsculs" with the "A" number of the Knights of Mirage!

The lineage of the Imperial Knight K.O.G., the "Prototype Knight of Gold," finally makes its appearance in IMS!
Although the Auge Arsculs is a prototype MH, its performance is similar to that of the K.O.G. and L.E.D. Mirage. Before the establishment of the Knights of the Mirage, Amaterasu built two MHs at the same time in the same base format for Hierarchy.
The one that Hierarchy chose became the Water Dragon (Schpertor), and the other was equipped with the Auger Binder and completed for Kaien.
After Hierarchy's death, Kaien chose to inherit the Schpertor, but the remaining Auge Arsculs was moved to Adler's Baranshay residence, where it was used to support the development of the Mirage series and Fatima's training.
It is said that the vast amount of data from this time was returned to the Mirage series and K.O.G. Please enjoy the charm of the "Prototype Knight of Gold," which is also Schpertor's brother, in the model as well.

The real winner has arrived! The quintessence of the new ABSOMEC mechanism in your hands! "K.O.G." w…

All Fukubukuro Lucky Bag purchases are Sales Final. No Exchange or Refunds is allowed. They are…